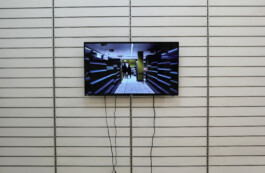 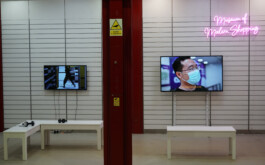 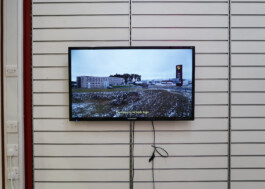 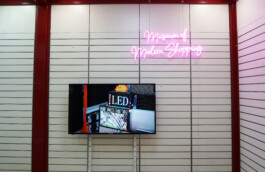 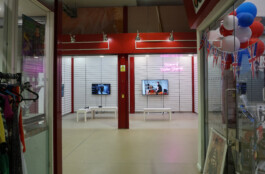 Museum of Modern Shopping presents three films, each exploring a different space of distribution or consumption.

Huaqiangbei - known as ‘The first electronic street in China’ - is the largest electronic market in the world. The pandemic over the past two years has had a great impact on business in the market. Shandong, who came to Shenzhen to work as a young man, had to close down shops temporarily because of the severe impact. The film explores the wave of store closures and pandemic prevention and control in Huaqiangbei in 2022.

Throughout 2019 Larry Achiampong developed new work in response to a residency with Waltham Forest Council. Working within an abandoned supermarket in Leyton, the artist configured a work using the building as a means to explore the social and political issues affecting the wider area in east London including race, class, gender, and gentrification. Through referencing the black body within a space that victimises it - in this case, the Western Supermarket - Achiampong uses the space as a double entendre. Whilst the system of the supermarket is generally assumed to offer consumers a vast array of choices in purchasing goods and services, these choices are rarely substantial and often sourced from a handful of many-faced corporations across clinical environments. The film is an artistic act of counter-surveillance that plays on the all-seeing eyes and repressive structures that have become the norm in consumer culture and retail environments. The politicisation of - and violence meted upon - the black body is explored in Beyond the Substrata through choreographed movements performed by dancer Kanika Skye-Carr.

This film is part of a wider project called Logistics Landscapes by Kateřina Frejlachová, Miroslav Pazdera, Tadeáš Říha and Martin Špičák. Over the years between 2015-2019, the warehouse area in the Czech Republic doubled. Czechia’s strategic position as almost one of the richest regions in Europe, together with lower prices for land, lower building costs, an affordable and less socially protected labour force, and stable but weak state regulation, make for ideal conditions for the construction of new logistics centres. On top of the well-known saying: ‘Czechia – Europe’s assembly shop’, we can now call Czechia Europe’s trans-shipment point, too.

Logistics parks - the huge warehouses that we see along the roads - are nothing but a reflection of the current economy and culture. They can’t be simply ‘solved’ or condemned. Working as a collective, the four architects try to grasp the context of this phenomenon that is transforming the landscape so radically. If architecture is the thing that puts warehouses together, they believe that it should also be able to critically break them down. Logistics is, on one hand, spatially represented by banal materiality and form and shallow planning and construction processes, and, on the other hand, by abstract global chains, utopian technologies, and robotisation.

Fang Di is a Chinese artist who is currently working in Shenzhen, China. His work discusses racism and social hierarchy through studies on news and political affairs. By switching between identities like a chameleon, he moves smoothly among different social classes, absorbing and resolving peopleʼs desires and wisdom gained through migration with his sensitivity. He uses various artistic languages to explore the entanglement and meaning of urban life and bravely discovers how special groups are defined under globalisation and nationalism in this inverted reality, which has become an inevitable social fracture today.

Fangʼs films have been screened at the Chicago Underground Film Festival (Chicago, 2014) and Pantalla Fantasma (Basque Country, 2014). He is a recipient of the New Star Award (2017), Toby Devan Lewis Fellowship (2013), and a finalist of Huayu Youth Award (2018) and Yishu 8 Award (2018). And he has been a resident artist at the Djerassi Resident Artists Program (California, 2014) and Storefront for Art and Architecture (New York, 2013). Fang received a BFA from Guangzhou Academy of Fine Arts and an MFA from Maryland Institute College of Art. He is also a co-founder of the collective Jiu Society.

Larry Achiampong's solo and collaborative projects employ film, still imagery, aural and visual archives, live performance, objects, and sound to explore ideas surrounding class, gender, and cross-cultural and post-digital identity. With works that examine his communal and personal heritage – in particular, the intersection between Popular culture and the post-colonial position, Achiampong crate-digs the vaults of history. These investigations examine constructions of ‘the self’ by splicing the audible and visual materials of personal and interpersonal archives, offering multiple perspectives that reveal the deeply entrenched inequalities in contemporary society.

Recent projects include commissions with The Line, London; The Liverpool Biennial 2021 and Art on the Underground, Roundel designs and a permanent sculptural intervention for Transport for London's Westminster Underground Station, London (2019 and 2022). Recent solo exhibitions include Wayfinder, Turner Contemporary/MK Gallery/BALTIC Centre for Contemporary Art, Margate, Milton Keynes, Gateshead (2022-2023); Relic Traveller: Where You and I Come From, We Know That We Are Not Here Forever, Phi Foundation for Contemporary Art, Montreal (2021); Beyond the Substrata, curated by Norman Rosenthal, Copperfield Gallery at Frieze Focus, 12 Piccadilly Arcade, London (2020); When the Sky Falls, John Hansard Gallery, Southampton (2020); Pan African Flag For The Relic Travellers Alliance & Relic Traveller, Phase 1, 019, Ghent (2019); Dividednation, Primary, Nottingham (2019).

Achiampong (b. 1984, UK, British Ghanaian) is a Jarman Award-nominated artist (2021). He completed a BA in Mixed Media Fine Art at the University of Westminster in 2005 and an MA in Sculpture at The Slade School of Fine Art in 2008. In 2020 Achiampong was awarded the Stanley Picker fellowship and in 2019 received the Paul Hamlyn Artist award in recognition for his practice. He lives and works in London and Essex, and was a tutor in the Photography MA programme at the Royal College of Art between 2016 - 2021. Achiampong currently serves on the Board of Trustees at Iniva (Institute of International Visual Arts) facilitating art policies in the UK and internationally and also holds a place on the board of trustees for Elephant Trust and is represented by C Ø P P E R F I E L D.

Katerina Frejlachová is an architect working with Prague-based firm MCA.

Miroslav Pazdera is an architect working as a research assistant at Czech Technical University’s School of Architecture in Prague and with Bernd Schmutz Architekten in Berlin.

Tadeáš Říha is an architect and writer currently working with 6a architects in London.

Martin Špičák is an architect and co-founder of Placemakers.cz collective. He works at the city of Prague’s department of urban planning.